Clara Augusta Ingraham was the wife of Wallace Calvin Abbott, the founder of Abbott. Clara was born on December 14, 1857 in Pomfret, Vermont. She married Dr. Abbott, her childhood sweetheart, in 1886 shortly after he received his M.D. from the University of Michigan. The couple moved to Chicago where they lived in a two-room apartment in Ravenswood.

Clara had a deep appreciation and concern for the employees of her husband’s company. When Clara died in 1924, she donated 12,000 shares of company stock to be used “in furtherance of my beloved husband’s profession and work”. Her will included a provision that provided for the establishment of a “charity” to help Abbott employees. Today this charity is known as The Clara Abbott Foundation.

Thank you, Clara, for the first 80 years. 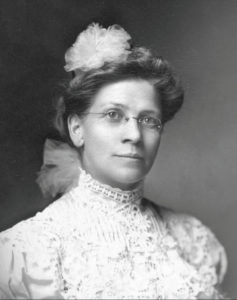 The Clara Abbott website had been translated for your convenience using translation software powered by Google Online Translation Engine. Reasonable efforts have been made to provide an accurate translation, however, no automated translation is perfect nor is it intended to replace human translators. Translations are provided as a service to users of The Clara Abbott website and are provided “as is.�? No warranty of any kind, either expressed or implied, is made as to the accuracy, correctness, or reliability of any translations made from English into any other language. Some pages may not be accurately translated due to the limitations of the translation software, such as dynamic or interactive pages.